Ava has participated in dozens of science communication events, and she loves seeing the way people light up when they start really thinking about what science does for them. The responses she saw from kids, colleagues, parents and people from every walk of life proved that we need more ways to celebrate science. We need more ways to start good conversations about science and invite great questions.

That’s how My Science Boutique was born. 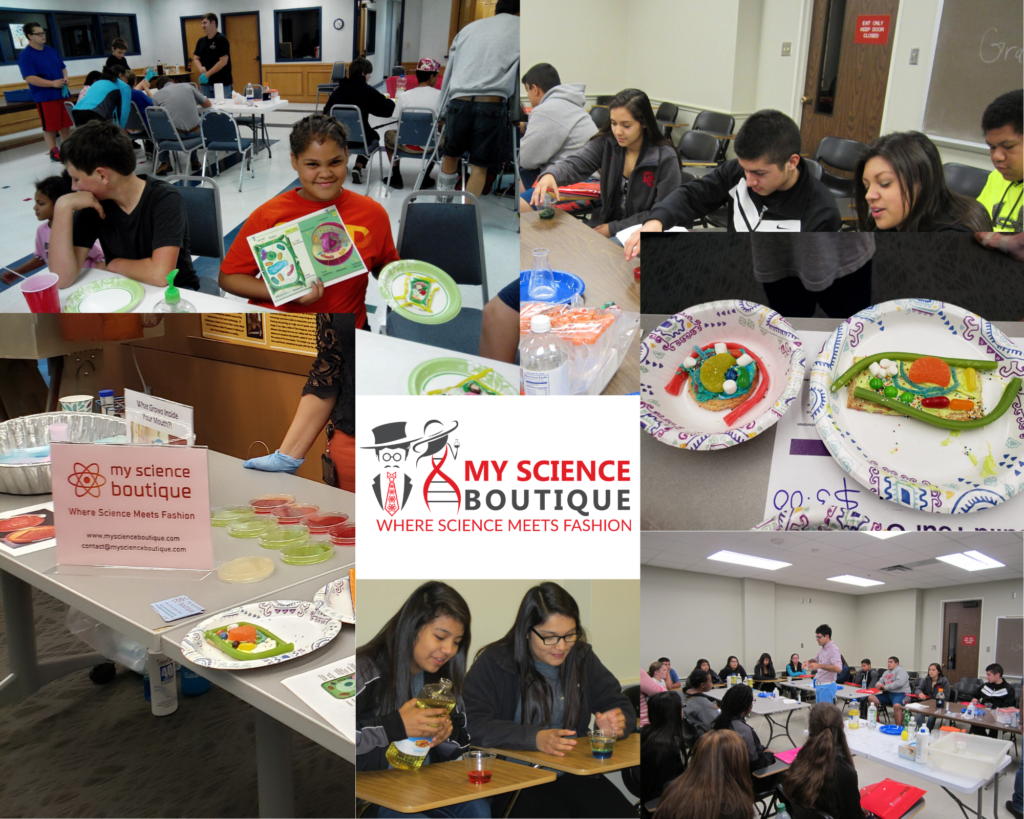 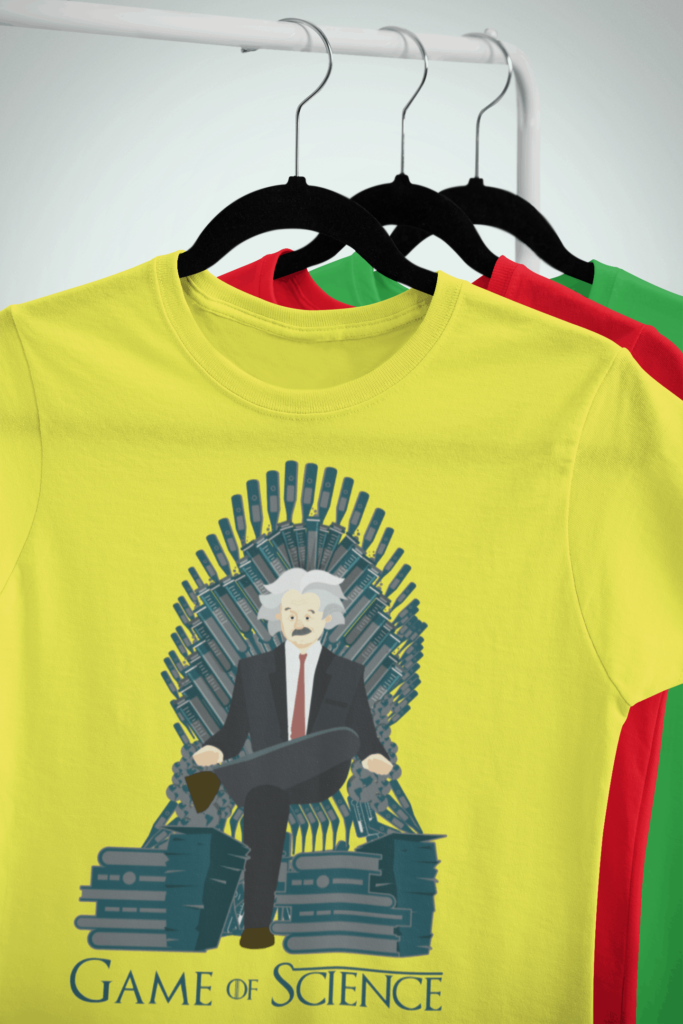 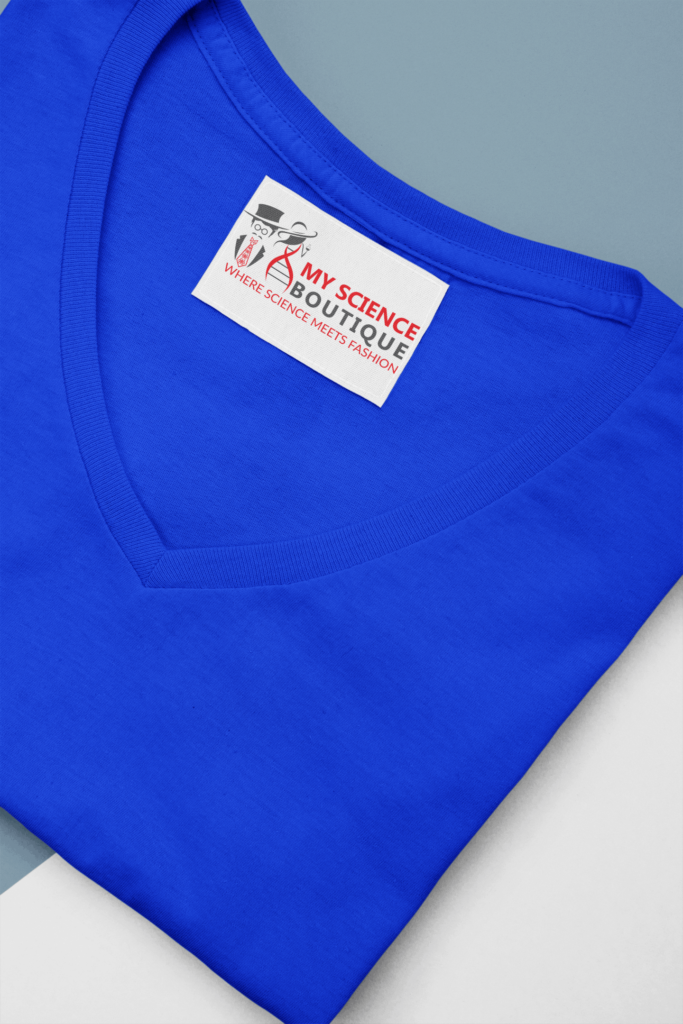 Our team is packed with smart scientific and creative talent! Together, we’re on a mission to spark curiosity, invite conversations, and spread scientific literacy around the world in small – but meaningful – ways.

Sure, teachers, researchers, and other science professionals love My Science Boutique. It is not every day that you get you see your favorite enzyme, planet or a research methodology displayed on apparels! The items we create help us all share our knowledge and enthusiasm.

Our designs aren’t just for scientists, though. One thing we have learned through our science communication and outreach events is that although people may not have an official scientific title, they’re just as proud of science as scientists. Everyone has fantastic ideas and asks really tough questions. The science community is lucky to have such allies.

Does this curious person who is in awe of science sounds like you?

My Science Boutique is for you! Broadcast your support of science and the scientific community with apparel and accessories that show off your smarts. You don’t have to work in science to embellish with science-fashion.

In all areas of science and research, we stand upon the shoulders of giants. For our accomplishments to continue, we must come together and help future generations of scientists flourish.

That’s why a portion of our profits goes to support STEM education. We’re proud to support the education of underprivileged young girls and boys in India. We have partnered with Jnana Prabodhini Educational Activity Research Center (EARC), Pune, India, to take our support right where it is needed.

Know of any other nonprofit whose mission and values closely align with ours? Reach out and connect with the My Science Boutique team. We’re always looking for ways to help share and spread scientific literacy. 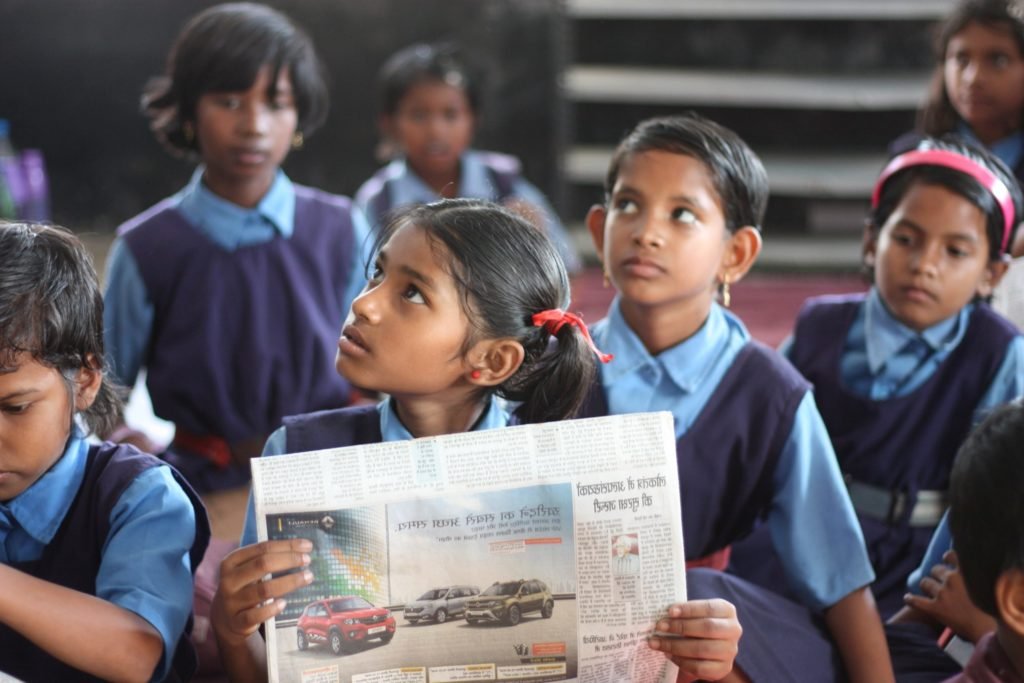 The Fashion, Products, and Services at My Science Boutique 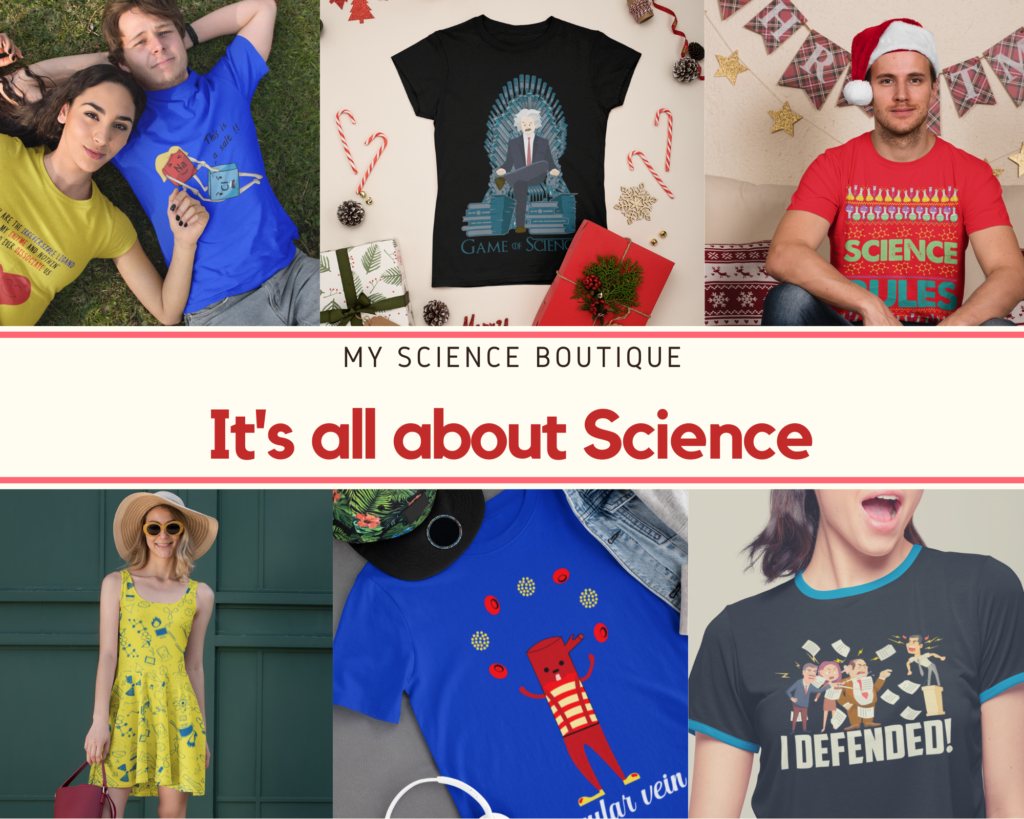 Browse our clothing inventory and you’ll find clever designs from a variety of STEM disciplines, from astrophysics to enzymology to statistics.
The t-shirts, dresses, leggings, skirts, sweatshirts, and other items you see in My Science Boutique come from the minds of real scientists. It was not a surprise to us that we were greeted with open heart and enthusiasm by science professionals, graduate students, and science communicators.

New items are added every week! Our catalog will soon include exclusive science gear for your baby, your dog, or even your guest room. Subscribe to our newsletter to be the first to know when new products are added.

In addition to what you see on the website, we love doing custom orders!

Have an event coming up and want an efficient way to start the conversation? Maybe you want to outfit your lab with some snazzy new gear. Group ordering is easy – we’ll help you create exactly what you want. Fill out this form for group orders, and soon we will have you and your group members dressed up in cool custom science gears.

We do the corporate ordering, too! Let’s talk about your needs, figure out the variables, and we’ll get you suited up in the custom design of your choice.

If you don’t see exactly what you’re looking for, get in touch. Custom requests are welcome. We’ve outfitted individuals, organizations, labs, and science fairs with made-to-order designs.  Fill out this form for custom orders. As science professionals, we love sharing our passion and expertise with the world. The science art we create for My Science Boutique is a perfect outlet after a long day in the lab. Our designs also serve as a spark, starting conversations that can lead to new ideas and opportunities.

Ava, our founder, wore a her favorite My Science Boutique t-shirt to the grocery store. Her cashier lit up when he saw it! The cashier, it turned out, was a biochemistry major who really wanted to work in a lab. Two weeks later, that young man took an RA position in Ava’s lab, and he was recently accepted into a Ph.D. program at his dream university!

The clothes you wear can be your personal billboard for whatever you want to share with the world. With just a t-shirt, you can broadcast your passions, find your people, and start conversations that may have life-changing results.

Look, we know that networking can be really, really hard. It’s not easy to find other scientists out there in the wild.

If you’re wearing a t-shirt with a pun about an enzyme, though, the other science-minded people in your community will find you. Wearing something from My Science Boutique is kind of like knowing the secret handshake to access the scientific community. Whether you’re a hardcore science supporter or you’re on your way home from the lab, your fashion choices are a beacon that helps you connect with other people just like you.

Our Commitment to Scientific Literacy

Scientific literacy is in our DNA, stuck right between the adenine and the thymine. Even our logo is educational; it’s Nikola Tesla and Marie Curie, though we’ve taken a bit of creative liberty with their style choices.

Through our products, we’re spreading scientific literacy every day by inviting curiosity and making connections.

Now, let’s take a second to talk about lithium batteries.

If you’re reading this on a cell phone or laptop, you’ve got a lithium battery right in front of you. The invention of rechargeable, lightweight lithium-ion batteries began in the 1970s as a response to the oil crisis. Lithium-ion batteries paved the way for wireless technologies, commercially viable electric vehicles, and even helped make solar and wind power more practical. In 2019, the Nobel Prize in Chemistry was awarded to the three scientists whose work on lithium-ion batteries has fundamentally altered the future of human life.

Can you name one of them?

That’s why we need scientific literacy. People around the world are deeply impacted by scientific research and advancements, yet few of them know or care.
My Science Boutique strives to start the conversation and ignite curiosity. Let’s build bridges between the scientific community and the people whose lives are impacted by our work, whether they know it yet or not.

Oh, and by the way, that Nobel Prize was awarded to John B. Goodenough, M. Stanley Whittingham, and Akira Yoshino.

We have seven core principles that are at the heart of everything we do at My Science Boutique:
1. Always be learning
2. Practice acceptance and respect
3. Have an abundance mindset
4. Choose your battles and fight for what matters
5. Live with relentless optimism
6. Always Pay It Forward
7. Trust your vision

We’re helping make science fun and accessible. If you’ve ever participated in a science communication event, you’ve probably found that nontechnical people ask profoundly practical questions. Kids are a great example of this; worldly affairs and other external factors don’t dampen their curiosity, so their questions are great.

It’s up to us to connect with all of those lovely, curious, practical people. A one-person revolution isn’t going to cut it. A spark can light a fire, but it goes out if there are no combustible materials to feed it. We all need to join hands to truly bring about a revolution and keep that fire burning.

Let’s bridge this dividing gap between science and people who may have chosen to ignore its contributions.

Let’s extend a hand to our neighbors and invite people to collaborate, even if they don’t have a scientific background.

Let’s take science out of the lab and into our communities. 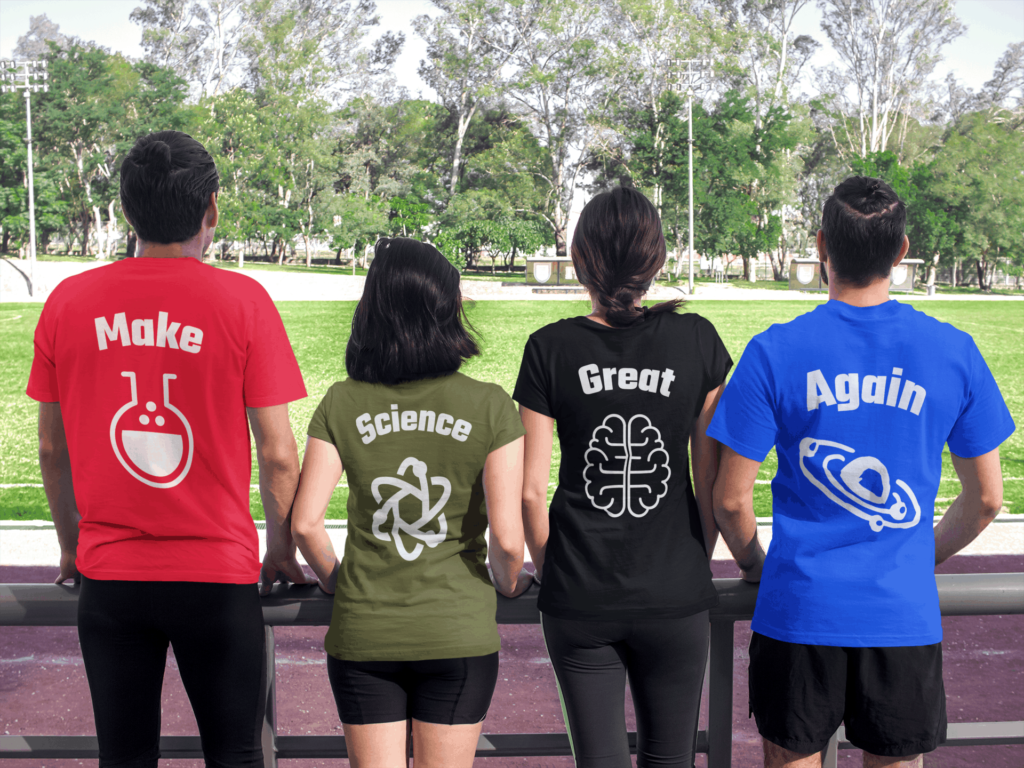 Speaking of good humans, the My Science Boutique has a whole pack of them.

The writing team is a super dedicated group of undergrads, grads, postdocs, and science professionals. Each is heavily engaged in SciComm and loves writing for My Science Boutique.

Sign up to My Science Boutique newsletter to receive special offers and news directly in your inbox! Get 10% off when you sign up!

My Science Boutique aims to stimulate conversations about science through creative ways including science-themed clothing and merchandise. Our team of science consultants, artists and designers, suppliers and vendors strive to bring the quality products to you for the perfect style and comfort. My Science Boutique is the US and Europe based brand owned and operated by science professionals.

Thank you for signing up!

The coupon code 'science10' will be applied at the check out.

WHY HELLO THERE!
Don't miss out!!